Nawal Nasrallah explores the intersections of culture, cuisine, and identity in the marketplaces of the Middle East, illustrating the global connections that underpin the sights, sounds, and smells of these hubs of humanity.

Nawal Nasrallah is an independent scholar previously professor of English literature at the universities of Baghdad and Mosul. She has published books and articles on the history and culture of the Middle-Eastern/Arab food, including Delights from the Garden of Eden: A Cookbook and History of the Iraqi Cuisine (Equinox Publishing), Dates: A Global History (Edible Series, Reaktion Books), and two English translations of medieval Arabic cookbooks: Annals of the Caliphs’ Kitchens and Treasure Trove of Benefits and Variety at the Table, both published by Brill. 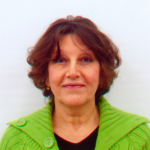 Daniel Osborn is a Program Director at Primary Source.

Learn more about Nawal Nasrallah’s work as a food historian and chef:

Special thanks to the Qatar Foundation International, which provided the seed funding and support to develop and launch this podcast and to produce this episode.

Thanks to Nawal Nasrallah for generously sharing her expertise in this episode.