Jerusalem is a city that has captivated the imagination and devotion of people for thousands of years. Jonathan Brumberg-Kraus, a rabbi and Wheaton College professor of religion, illuminates the connections between each of the Abrahamic traditions and the historical and theological ties grounding them in Jerusalem.

Jonathan Brumberg-Kraus is Professor of Religion at Wheaton College. His is the author of Gastronomic Judaism as Culinary Midrash (Lexington Press, 2018) and has published numerous articles on Jewish food in the Proceedings of the Oxford Symposium on Food and Cookery, Studies in Jewish Civilization, and other journals, and has translated Rabenu Bahya ben Asher’s fourteenth-century Hebrew mystical manual on food, Shulhan Shel Arba (Table of Four) into English which is available online. He has regularly taught “The Rituals of Dinner” First Year Seminar at Wheaton for over twenty years, as well as other courses in Judaism, Christianity, and Islam. He holds a PhD in Religious Studies (New Testament) from Vanderbilt, and is an ordained Reconstructionist Rabbi. He lives, cooks, eats, and gardens with his wife Maia, an elementary school teacher in Providence, RI. 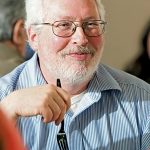 Special thaks to the Qatar Foundation International, which provided the seed funding and support to develop and launch this podcast and to produce this episode.

Thanks to Jonathan Brumberg-Kraus and Susan Balogh for generously sharing their expertise.