Peter Krause of Boston College breaks down the crisis in Syria and shares strategies for teaching about Syria in the classroom.

Peter Krause is an assistant professor of political science at Boston College, and an expert on Middle East politics, terrorism, and non-state violence. He has a PhD in political science from MIT, where he is also a Research Affiliate in the Security Studies Program. His book Rebel Power: Why National Movements Compete, Fight, and Win was published by Cornell University Press in 2017. 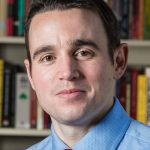 Learn more about teaching the war and humanitarian crisis in Syria with these free online resources:

Thanks to Professor Krause for his time, knowledge, and enthusiasm in sharing his expertise on the crisis in Syria.

“Aleppo,” by Joshua Tabti, used under Creative Commons License Attribution 2.0 Generic (CC BY 2.0). The image has been cropped.