Ali Asani of Harvard University explores the diversity of ideology and practice within Islam. We also talk with Rachel Otty, a public high school teacher in Cambridge, MA, about why and how she teaches religious literacy.

Ali Asani is Professor of Indo-Muslim and Islamic Religion and Cultures at Harvard University, where he specializes in the teaching of the practice of Islam. His own research explores the devotional traditions among Muslim communities in South Asia. 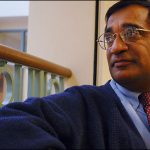 Rachel Otty is a history teacher at Cambridge Rindge and Latin School, a public high school in Cambridge, Massachusetts. She has written about teaching about Islam and religious literacy for Education Week and for PBS.org (citations and links below).

Learn more about teaching the diversity of Islam and religious literacy with these free resources:

Thanks to Professor Asani for his time and generosity, and to Ms. Otty for her willingness to share her work on teaching religious literacy.