There are over fifty cities throughout Africa with a population of more than one million inhabitants. However, urban spaces tend to be left out of America’s collective imagination of the continent. Cities are cosmopolitan places where ideas circulate, people mix and mingle, trends are set, and influences of innumerable origins meld together. In this episode, we explore the experiences of young people in urban settings throughout Africa. We focus on the ways youth cultures can affirm a vision of Africa that cuts against the grain of stereotypes and dominant narratives.

Afrofuturism: A cultural aesthetic that combines science-fiction, history and fantasy to explore the African-American experience and aims to connect those from the black diaspora with their forgotten African ancestry (tate.org)

Cosmopolitanism: Having wide international sophistication; having worldwide rather than limited or provincial scope or bearing (merriam-webster.com)

Afropolitan: Someone who has roots in Africa, raised by the world, but still has an interest in the continent and is making an impact (cnn.com)

Collective Effervescence: A powerful form of synchrony that is associated with intense emotions and communal shared experiences (psychologytoday.com)

Vibe: A distinctive emotional quality or atmosphere that is sensed or experienced by someone (thefreedictionary.com)

Anima Adjepong, PhD, is a sociologist and Assistant Professor of Women’s, Gender, and Sexuality studies at the University of Cincinnati whose research examines culture, identities, and social change in West Africa and the diaspora. 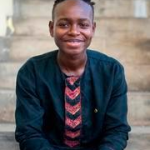 Lilian Sibanda is a English Second Language Teacher in Peru and a Graduate Research Assistant at the University of Massachusetts Boston who is from Zimbabwe.

Shamiso Ngongoni is a Salesforce Administrator at The African, a nonprofit in Columbus, Ohio focused on the socioeconomic advancement of the African Diaspora, and is from Zimbabwe.

Irene Asuwa is a graduate of the University of Nairobi and an environmental activist in Kenya.

Thanks to Anima Adjepong, Lilian Sibanda, Shamiso Ngongoni, Irene Asuwa, and Katherine Manning for sharing your insights and expertise.