Steven Caton of Harvard University breaks down the civil war, famine, and water crisis in Yemen.

Steven Caton is the Khalid Bin Abdullah Bin Abdulrahman Al Saud Professor of Contemporary Arab Studies at Harvard University. His research focuses on the Arabic language, cultural studies, and the politics of water. He is one of the foremost experts on Yemen and the Arabian Peninsula. 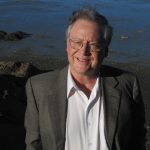 Thanks to Professor Caton for his time and for his enthusiasm in helping to bring the crises in Yemen to light.